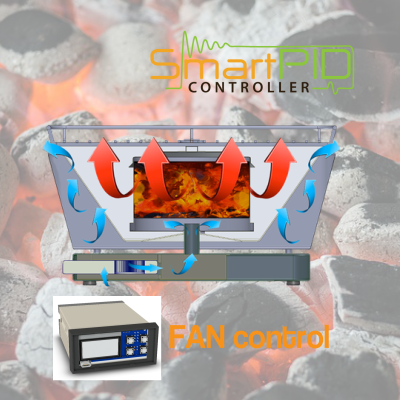 SmartPID is a generic platform that can be adapted to many different thermal regulated process, the first applications developed are focused and vertical on the home beer brewing world but as reported few times many others different appreciations are in the roadmap

With this post I’m very happy and proud to announce the first relase of the BBQ application !
I’m a newbie of the grill but I like to have full control of what happens in my small BBQ and try to mange cooking process with precision and scientific principle. For that reason I try to build a system to control charcoal bbq based on a simple principle: mage a blow fan speed and air flow on the charcoal to regulate the pit temperature. Beside this the use of a fan speed up the fire start with no or much less smoke 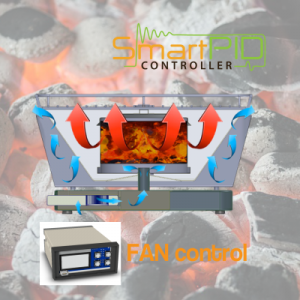 Based on this principle the smartPID bbq edition perfectly do the job, with exactly same HW platform the new application SW measures the temperature and controls via PID and PWM signal the fan speed rotation, the more temperature is close the set point the less is the air flow

Monitor
the smartpid report the current temperature and reference temperature for both channels interdependently. When temperature reach the target value an alarm is played, and a count up and count down timer is started

same as monitor mode but you can manually regulate the fan speed in the range 0 – 100 % where 0 correspond to minimum speed , and 100% to maximum speed

Lid Open mode
the smartPID algorithm try to detect when you open the lid and so the pit temperature will drop drastically causing an increase of the fan speed.
In order to avoid this the current temperature dorp detection move the system in lid mode status and reduce the fan speed for a certain amount of time configurable

In the next release all the wifi connectivity and remote logging of the data will be added using same approach than homebrewing application. Also the smartphone app will be adapted to BBQ applications

new features will come with the suggestion of pit master !